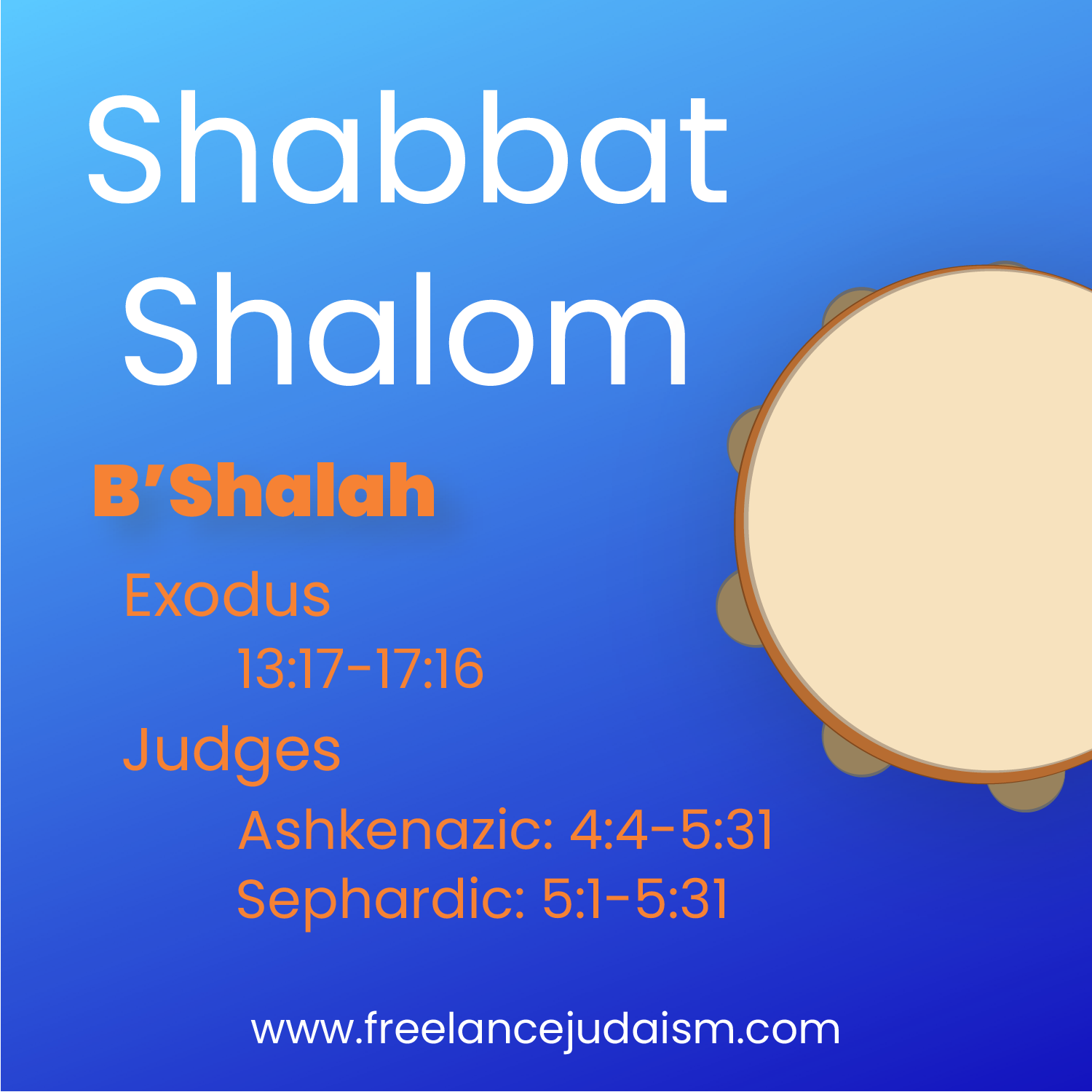 Triennial #3
Aliyah #1: 14:26 - 15:21
The fist aliyah picks up after the Israelites have successfully fled from the Egyptians. The red sea has parted to let the Israelites through, and closed to drown their Egyptian pursuers. The Aliyah begins with a declaration of the Israelite’s faith in God and Moshe (Moses) and moves straight into chapter 15. This section of the chapter is known as Shirat HaYam or “the song of the sea” and is sung during morning services everyday. It begins with Moshe and the people singing a song of jubilation, acknowledging God’s might and wonder and the lauding the miracle of the red sea. It end with Mir’yam (Miriam), who is here titled a prophetess, famously picking up her timbrel and the women singing and dancing along.

Aliyah #2: 15:22-26
Their jubilation does not last long as they venture into the wilderness. After just 3 days the people found themselves without water. They do come to one place with water, but the water is too bitter for them to drink. Moshe calls out to God for assistance and is instructed to throw a particular tree into the water which sweetens the water and makes it palatable for the Israelites to drink. God gives the Israelite people assurance that if they only heed God and listen to God’s voice, then God will protect them and prevent any of the illness that was in Egypt from befalling them.

Aliyah #3: 15:27-16:10
Fast forward 2 months and 12 days, and the Israelites begin to complain once more to Moshe and Aharon (Aaron). This time it is not thirst but hunger which is the source of their frustration. The Israelites complain that they might as well have died in Egypt where at least they were fed, rather than starve to death in the wilderness. Once again God comes to the rescue, but this time issues a test. God offers the people Mana - a bread from the heavens - but instructs the people that they should only gather as much as they need each day, and no more. On the 6th day (Friday) they should gather twice as much as they need, since God will not provide any on the 7th day (Saturday/Shabbat).

So Moshe and Aharon share the news with the people that God will provide meat in the evening, and bread in the morning, and all the instructions that come with it. As Aharon speaks with the Israelites, the glory of God could be seen in a cloud behind him, so that the people knew that it was God who was the source of their salvation once more.

Aliyah #4: 16:11-27
Just as God had said would happen, so it happened. In the evening it quail could be found throughout the camp, and in the morning the mana, in the form of a frost-like dew, covered the ground for the people to gather and eat.

Those that gathered according to their instruction took at much as they needed and found they were sufficiently satiated. Unfortunately, however, despite Moshe’s instruction not to take extra or save any until the morning, some did just that. Those who were selfish and lacked faith in God’s ability to provide more the next day found themselves with rotting leftovers and an angry Moshe.

When the 6th day arrived, most listened and gathered enough for 2 days. Moshe instructed the people not to come looking for more the next day, since that is a day of rest. Nevertheless, some Israelites ignored Moshe, and came looking in vein on the 7th day to find more food.

God asks Aharon to take a jar and place a little mana inside it to be kept for all generations to look upon and remember how God sustained the Israelites in the wilderness. Aharon does just this, and the Israelites become sustained on mana for the next forty years as they wander the desert. (This is the first mention of forty years, and a foreshadowing to what is to come later in the Torah.)

Aliyah #6: 17:1-7
As the Israelites continue their journey, they once again find themselves lacking water and begin to demand water from Moshe. In frustration, Moshe challenges the people and asks why they keep doubting God. Nevertheless, as the complaints grow louder Moshe fears for his safety and turns to God. Moshe is instructed to strike a rock in front of the people and that water will come forth from it to water the people. (Not to be confused with the famous striking of the rock where Moshe gets in trouble, this time Moshe is actually told to strike the rock.)

Aliyah #7: 17:8-16
Our very jam-packed parshah this week ends with on a completely different note. In the final Aliyah, Amaleik (Amalek) and his forces comes to fight with Moshe and the Israelites. Moshe puts Y’hoshua (Joshua) in charge of creating a fighting a force, and send him to do battle. While they fight, Moshe stands upon the hillside holding his rod high. When Moshe held his hands up the battle swayed in their favor, but when he dropped them the fight would turn for the worse. As a solution to Moshe’s tired arms, Aharon and Ḥur placed stones under his arms and stood beside him, helping hold up Moshe’s arms.

Upon their victory, God commands that the name of Amaleik be blotted out, and that Aharon writes a book for the generations to remember what had transpired. Our parshah ends with Moshe building an altar to God, and the acknowledgment that God’s fight with the people of Amaleik will continue for generations to come.