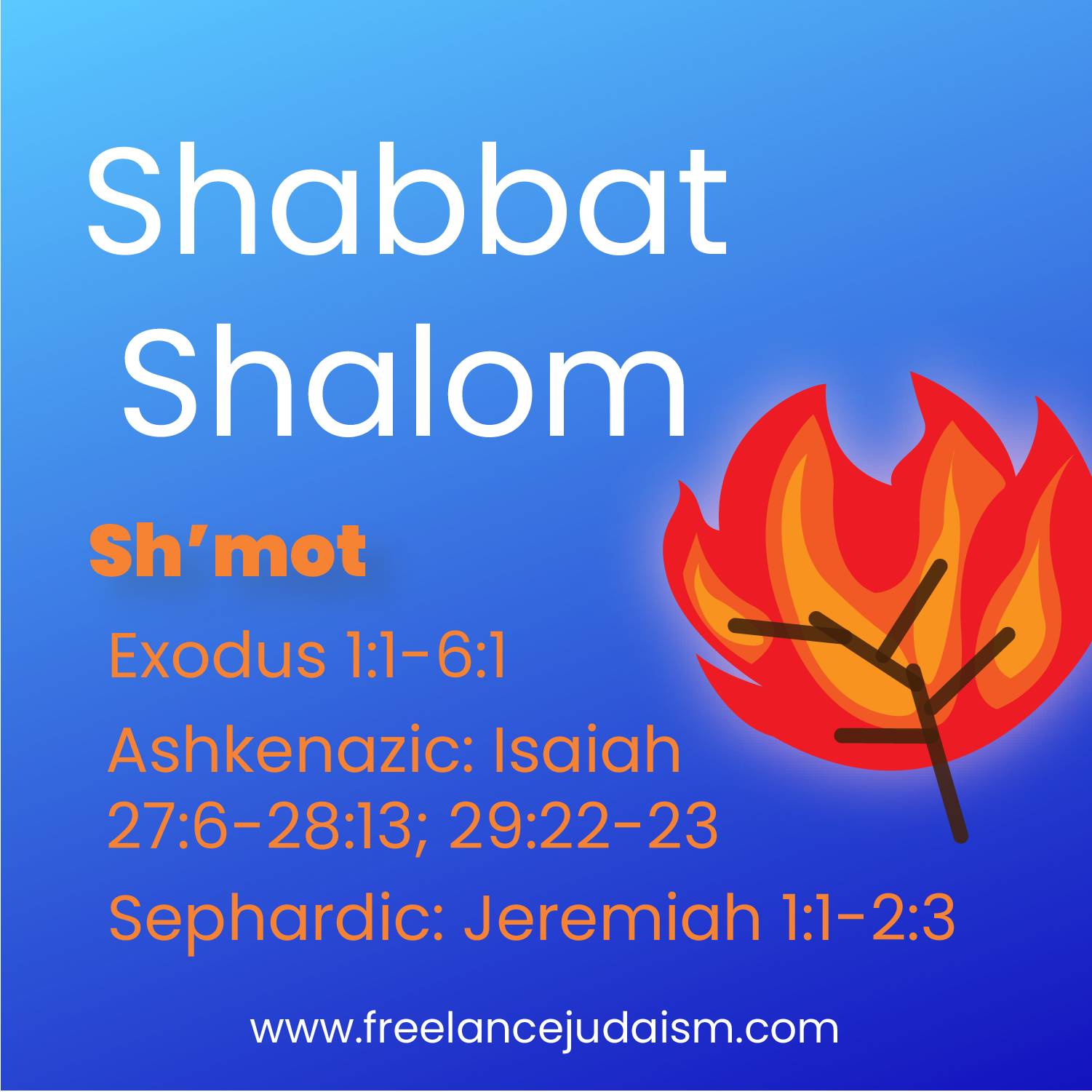 Triennial #3
Aliyah #1: 4:18 - 20
As we begin the 2nd book of the Torah (Sh’mot - Exodus), we fast forward in time. Yoseif (Joseph) has died and his family has flourished in Egypt, becoming the Israelite people. Over 400 years have gone by and the people have been enslaved by the Egyptians. Moshe (Moses) has been born, and has fled Egypt. In this Aliyah, we pickup in the middle of God’s recruitment of Moshe, in front of the burning bush, to be the leader who will redeem the people from slavery. After a bit of poking and prodding, Moshe agrees and asks his father-in-law Yitro (Jethro) for a leave of absence to return to Egypt. Moshe takes the staff of God and saddles up with his wife and children to head to Egypt.

Aliyah #2: 4:21 - 26
As Moshe heads to Egypt, God begins to prepare Moshe for his encounter with Pharoah. God tells Moshe that Pharaoh will be stubborn, and that Moshe should demand the Israelite people be released to return to God, lest the first born of the Egyptians be slain.

Then the Aliyah transitions to a bizarre and unexplained moment. God meets Moshe and family in a lodging place with the intent to kill “him”. The text is unclear as to who, specifically, God was looking to kill, but it would seem from what follows that the reason is a failure to enter into the Israelite covenant of circumcision. It is Tziporah, Moshe’s wife, and not Moshe, who quickly acts to circumcise her son and abate God’s anger.

Aliyah #3: 4:27 - 31
Meanwhile in Egypt, God instructs Moshe’s brother Aharon (Aaron) to meet Moshe outside the city. At the “Mountain of God” - an unspecified location - Moshe recounts all of God’s commands to Aharon. Together they head to the Israelite people where Aharon speaks the words Moshe instructs him to speak, Moshe shows the signs that God instructs Moshe to show, and the Israelites realize that God has not forgotten them and they begin to worship God.

Aliyah #4: 5:1 - 5
As quickly as the Israelite people accepted the signs of Moshe, Pharoah rejects them. Aharon and Moshe ask Pharoah to release the people, not entirely, but rather to give them 3 days to journey into the wilderness to pray to God (and presumably 3 days to return). Swiftly Pharoah rejects the request and becomes upset at the notion that the Israelites who get any moments rest from their laborious tasks.

Aliyah #5: 5:6 - 9
Not only does Pharoah reject the request for time off, he counters by commanding the taskmasters to make the Israelites work even harder. Pharoah decrees that no longer shall the Israelites be provided with the straw from which to make bricks. Instead they need to go gather their own straw, and still somehow meet the same quota of bricks as before. Pharoah is also quick to blame the harsh labor on the desire of the Israelites to pray to God.

Aliyah #6: 5:10 - 14
The taskmasters deliver the message to the Israelites and the people begin to gather straw themselves. When, inevitably, they fail to achieve the same quota of bricks as prior, the taskmasters begin to beat the people.

Aliyah #7: 5:15 - 6:1
Having been beaten, the Israelites complain to Pharoah. They ask why they are being treated so harshly. Pharoah explains that if they have enough time in their day to go worship God, then surely they have too much free time, and should instead be working harder. At this, the Israelites realize that it was Moshe and Aharon’s request that has gotten them into trouble. They begin to blame Moshe and Aharon and accuse them of giving cause to the Egyptians to kill the Israelites. Moshe, distraught over the situation, turns to God and demands answers. Moshe wants to know if this was the outcome that God had in mind when tasking Moshe to return? Our parshah ends with God assuring Moshe that they are about to witness what God has planned for Pharaoh. That it is with a “strong hand” in which Pharaoh will soon come to release the Israelite people.