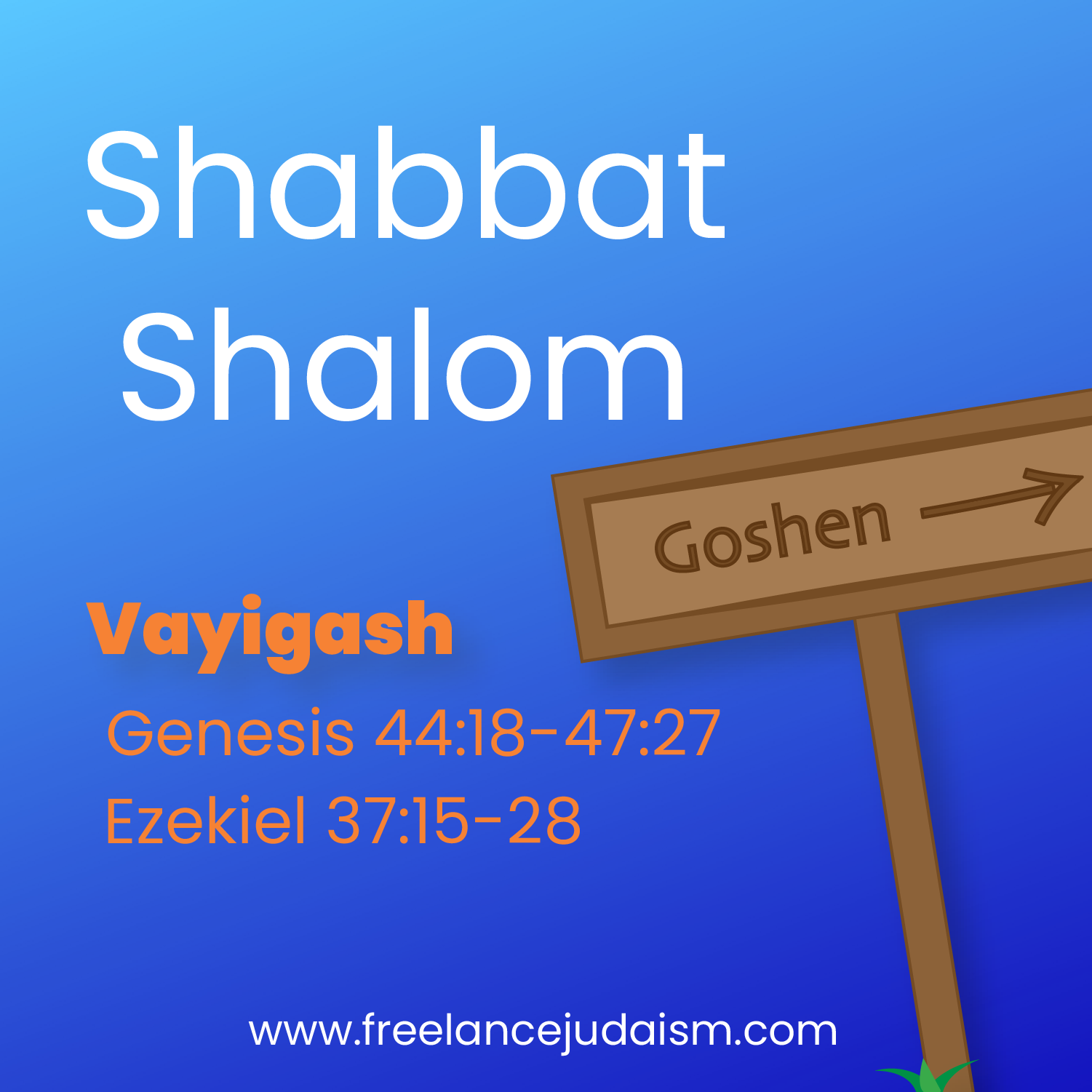 Triennial #3
Aliyah #1: 46:28-30
Having now had a happy reunion of brothers, Yoseif (Joseph) sends for his father Ya’akov (Jacob). Just before this Aliyah we get an accounting of the entire family of Ya’akov (66 plus spouses) as they make their way to see Yoseif in Goshen (near Egypt). In this Aliyah, Y’hudah (Judah) goes ahead to let Yoseif know they are close. Yoseif rides out to meet his father and they have a heartfelt and tear-filled embrace. Ya’akov declares that he can now die a happy man knowing that his son is, indeed, still alive.

Aliyah #2: 46:31-34
Yoseif wants his family to be able to stay with him, so he preps for a meeting with Pharaoh. He instructs his family that he will tell Pharaoh that they are shepherds and request that they be allowed to live and thrive in the land of Goshen.

Aliyah #3: 47:1-6
Fulfilling exactly what he had said he would do, Yoseif presents his family to Pharaoh. Without hesitation, Pharaoh agrees to allow them to live in Goshen, offers them jobs within Egypt, and offers them the best of what Egypt has to offer. Thus begins the long history of the Israelite people in Egypt—a saga that will not end until the book of Sh’mot (Exodus) a few chapters (and a few hundred years) later.

Aliyah #4: 47:7-10
Next, Pharaoh is introduced to Ya’akov who we learn is now one-hundred and thirty years old. They have a very friendly exchange, and Ya’akov—along with his children—leave Pharaoh’s presence in peace.

Aliyah #5: 47:11-19
After settling in the land, the narrative shifts back to Yoseif and his role taking care of Egypt in the famine. As the famine grows wors the people of Egypt begin running out of money to pay Yoseif for Pharaoh’s food rations. The shrewd business man that he is, Yoseif decides to begin taking payment in the form of livestock. Of course, that is also a limited resource, and people begin running out of that as well. Not to miss the opportunity, Yoseif begins acquiring land and the people themselves (in the form of slavery) as payment for food rations.

Aliyah #6: 47:20-22
Naturally, this puts Yoseif in control of quite a bit of land. As the right-hand man of Pharaoh, the land is now Pharaoh’s property. We learn that through Yoseif’s hard work Pharaoh ends up controlling the entirety of Egypt (minus the land given to his special priests).

Aliyah #7: 47:23-27
As the famine comes to a close, Yoseif institutes a one-fifth tax on all future harvests. He makes Pharaoh exceedingly rich and powerful. We end our parshah knowing that by serving Pharaoh so well, Yoseif had also gained the means to settle his family (the Israelite people) in luxurious style in the land of Goshen where they would flourish and increase greatly in population.