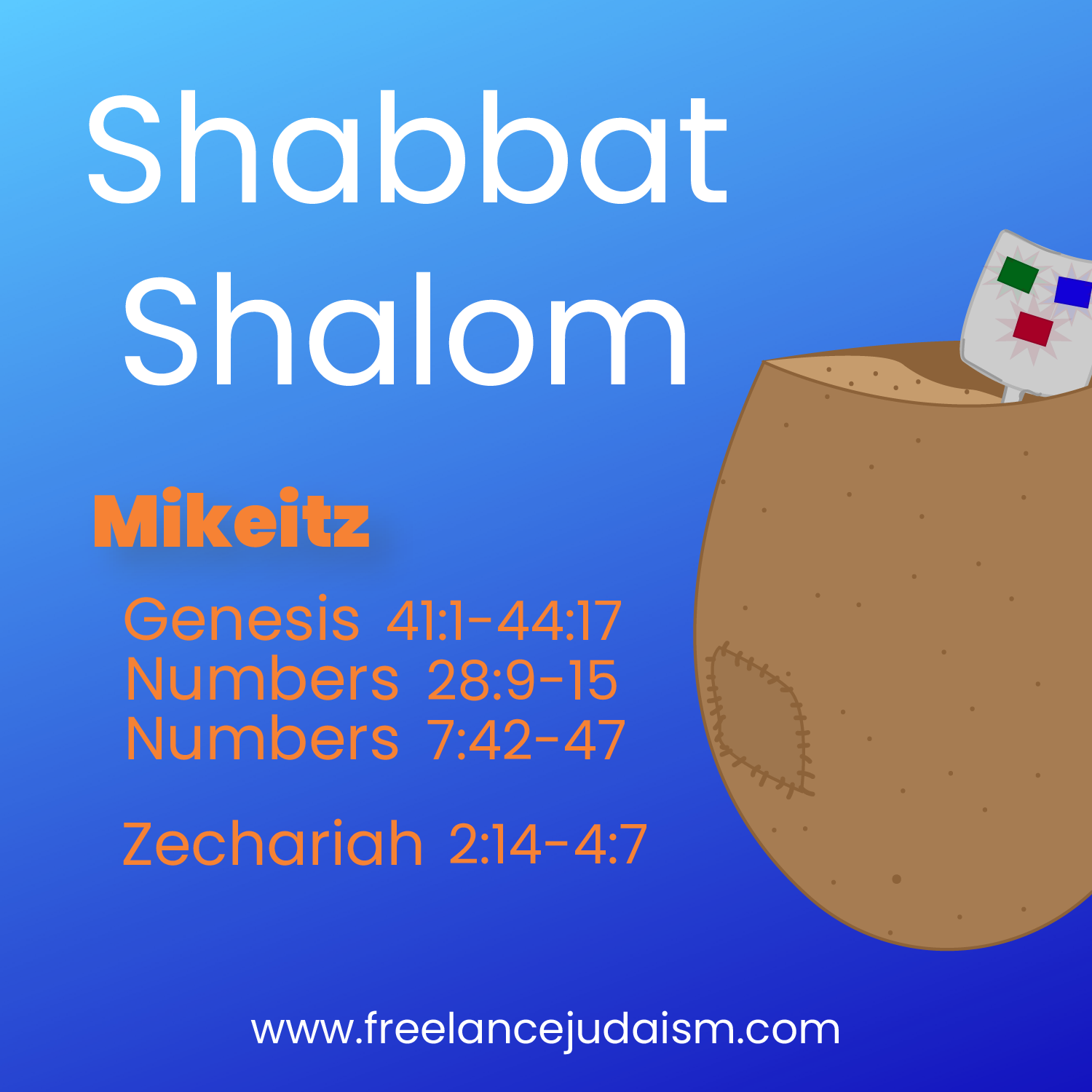 Triennial #3 / Ḥanukah / Rosh Ḥodesh
This year Parshat Mikeitz coincides with the 6th night of Ḥanukah as well as Rosh Ḥodesh (the new month). When this occurs, the 7 Aliyot for Mikeitz are condensed to 6 Aliyot. The 7th becomes reserved for the special Rosh Ḥodesh reading: Pinḥas. The maftir is also special for the holiday, but not included in the summary below.

Aliyah #1: 43:16-18
Prior to this Aliyah, Yoseif worked his way up to being Pharaoh’s right-hand man, and placed in charge of the rations during the great famine of the land. He has already recognized his brothers when they come to seek food in the famine, and are returning for the 2nd time - now with their youngest sibling Binyamin (Benjamin).

Yoseif, being very pleased with the presence of his only brother by way of his mother Raḥeil (Rachel) sends his servants to prepare a feast for his family. Not knowing what was going on, the brothers assume the worst and believe they are about to be in trouble for having accidentally taken back the money they brought the first time. (Yoseif had it slipped back into their bags when they weren’t paying attention).

Aliyah #2: 43:19-25
In anticipation of being accused of theft, the brothers volunteer the information to Yoseif’s steward. They explain that they have brought the money back along with extra to pay for new rations. They defend themselves by saying that they have no idea how the money got back in their bags in the first place. Fortunately, the steward reassures them that it must have been divine intervention since he had, indeed, received their first payment. Shimon (Simeon), the second oldest, is then reunited with his brothers. (Shimon had been detained as collateral to ensure they returned with Binyamin). They are given food for their animals and water to bathe.

Aliyah #3: 43:26-29
Still pretending that he does not recognize his siblings, Yoseif enters into the banquet hall and greets them. The brothers (who actually don’t recognize their brother Yoseif, whom they likely thought was dead or at best a slave somewhere), offer Yoseif the gifts which they had brought with them. Yoseif inquires of their father and if Binyanim is the youngest brother of whom they spoke. (Remember: Yoseif has not seen his Binyamin in many years, when Binyamin was still very young). Yoseif offers Binyamin a short blessing.

Aliyah #4: 43:30-34
Overcome with emotion at the presence of Binyamin, Yoseif excuses himself to cry in the other room. He composes himself, washes his face, and returns to begin the feast. Everyone was served separately since Egyptians were not permitted to dine with Hebrews. Everyone was seated in order of rank, and everyone in the room were quite stunned as they realizes Binyamin, the youngest and therefore not supposed to be afforded special treatment, was given 5-times the amount of food as everyone else.

Aliyah #5: 44:1-6
Yoseif had already played one cruel joke on his brothers in keeping Shimon as a ploy to see Binyamin. His plotting continues in this Aliyah as the brothers prepare to leave. Yoseif has his servants give the brothers not only the food they came for (in excess), but instructs them to put their money in their bags (like the first time) as well as his special silver goblet. Early in the morning, the servants were then instructed to go and accuse the brothers of stealing the goblet! They do precisely as they are told.

Aliyah #6: 44:7-17
Hearing the accusation, the brothers are understandably shocked. They are so confident that nobody has stolen that they suggest their own punishment. They suggest the thief shall be killed and the rest of them enslaved should the accusation prove true. Knowing the outcome, the servant counters with one that seems compassionate (at least to anyone that doesn’t know the game is rigged). The servants say that only the thief shall be enslaved and the rest shall go free.

When the goblet is discovered within the belongings of Binyamin, the brothers are horrified. They all head back to the house of Yoseif. When he sees them, Yoseif continues the lie and demands an explanation of their theft. Y’hudah (Judah), terrified to return to their father Yitzḥak (Isaac) without Binyamin, presents himself and insists that they shall all serve as slaves on behalf of their youngest brother. Yoseif refuses their offer and insists that only the thief remain and the others head back to their father.

Aliyah #7: Parshat Pinḥas: Bamidbar 28:9-15
Parshat Pinḥas is read from more often than any other single parshah in the Torah. This is because it is read from on every holiday. Chapter 28, specifically, discusses the various sacrifices that are to be offered by the Israelites throughout the year. Of course today none of these sacrifices take place. The sacrifices were meant to take place in the Temple in Jerusalem, the second of which was destroyed in 70 C.E. Without the existence of the Temple, the Rabbinic sages decreed a practice of blessings & prayer to take the place of the sacrifices.

In this Aliyah, the focus in the first section is on the special Shabbat sacrifice: 2 lambs, flour and oil with a libation (special drink).

Then in verse 11, it switches from the Shabbat sacrifice to the Rosh Ḥodesh sacrifice: two bulls, one ram, seven lambs, and a meal of flour and oil for each one. The exact measures are provided for each. There should also be a libation of wine for each. Finally, the Aliyah ends with an additional goat as part of a transgression offering.