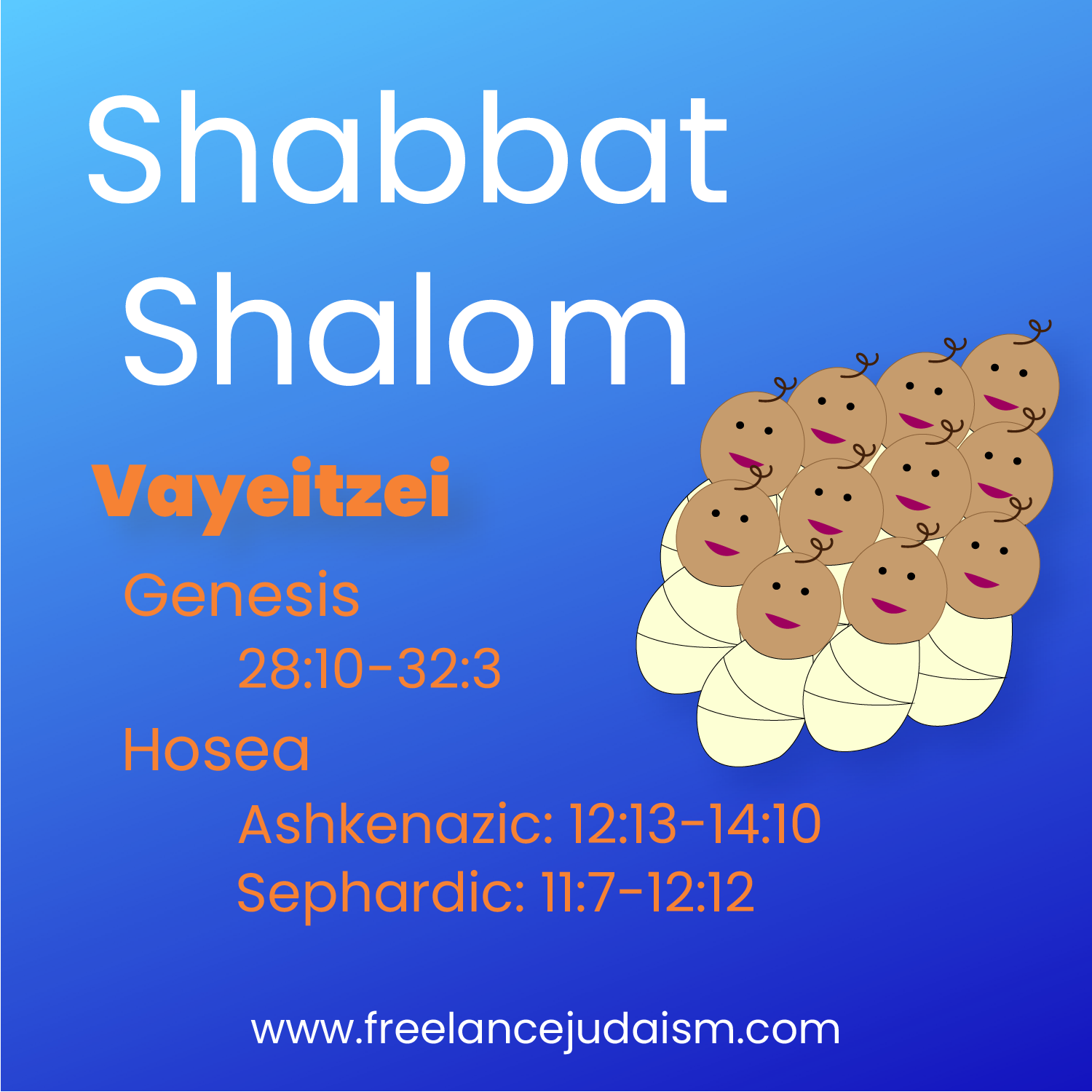 Triennial #3
Aliyah #1: 31:17 - 21
Our parshah opens this week with bitterness and frustration between Ya’akov (Jacob) and Lavan (Laban). The tensions hit a turning point as Ya’akov, along with his wives, Raḥel (Rachel) and Lei’ah (Leah) leave the house of their father, Ya’akov’s father-in-law, Lavan. For some reason, as they are leaving Raḥel also decides to steal her father’s idols - though whether or not it is to punish her father, or to worship them herself, is unclear. We also learn that Lavan was left in the dark on this decision, having no idea that his children (and all their newly amassed wealth) have left.

Aliyah #2: 31:22 - 24
Three days after Ya’akov and family have left, Lavan learns of their departure. Quickly he takes some of his people with him and pursues after his son-in-law and daughters. After 7 days of travel, Lavan finally catches up with Ya’akov. Quite ominously, God appears to Lavan at that time in a dream and issues a mysterious warning: be very careful engaging with Ya’akov, regardless of whether your intentions are good or bad…

Aliyah #3: 31:25 - 35
Furious, but cautious, Lavan confronts Ya’akov. He ask him why he decided to leave without saying a word, and suggests that had Ya’akov been upfront, that Lavan would have thrown him a big goodbye celebration. Lavan further expresses his frustration that he did not get to say goodbye to his children, and inquires as to the motives of Ya’akov stealing his idols (which, of course, Raḥel had stolen).

Ya’akov responds to Lavan, suggesting his concern that Lavan would not have let his daughters go, but rather would have taken them back by force. He also expresses surprise at the accusation of stolen idols, which Ya’akov knew nothing about, and permits Lavan to search his entire encampment.

Raḥel, hearing that her tent would be searched, cleverly hides the idols in her camel’s pouch and sits upon it. She explains to her father that she cannot rise from her seat since “the period of women” is upon her. While we still know nothing of her intentions with these idols, Lavan fails to find them.

Aliyah #4: 31:36 - 42
Lavan’s failed search seems to be the final straw that sets off Ya’akov. In this Aliyah, Ya’akov puts on the table everything he’s been holding back for the previous 20 years and let’s Lavan know exactly how he feels. He shouts at Lavan in his anger, pointing out that he has done nothing wrong to Lavan and that it is Lavan who has time and time again taken advantage of Ya’akov.

He recounts the twenty years of service he’d give, the financial sacrifices he made to ensure he was never in debt to Lavan, the brutal work conditions he endured, the 14 years he worked to marry his wives, the 6 years he worked for his wealth, and the manipulation of his wages that he never once complained about. Ya’akov acknowledges God’s role as his caretaker and accuses Lavan, saying that if it were not for God, Lavan would just have soon left him penniless.

Aliyah #5: 31:43 - 45
Lavan, knowing Ya’akov is right in everything he spoke, tries to salvage the relationship. While he tries to lay claim to Ya’akov’s wives, children, and flock, he nevertheless offers to make a new pact between himself and Ya’akov. Ya’akov, wanting to avoid conflict, sets up an altar for their new pact.

Aliyah #6: 31:46 - 50
Knowing their paths would likely not cross again, Lavan begins the pact with Ya’akov by warning Ya’akov not to mistreat his wives, nor take additional wives besides them. That God is a witness between Lavan and Ya’akov that Ya’akov will take care of Raḥel and Lei’ah.

Aliyah #7: 31:51 - 32:3
The parshah concludes with the completion of their new pact. They set up their pillar as a border-crossing, and agree that neither will cross the other side with any hostile intent. Essentially forming a peace treaty between their tribes, with God as their witness. They share a meal and spend the night in that location before Ya’akov departs with his family in the morning. As they leave, to head back to the home of his father Yitzḥak, Ya’akov encounters some angels - a foreshadowing of what is to come in next week’s parshah.