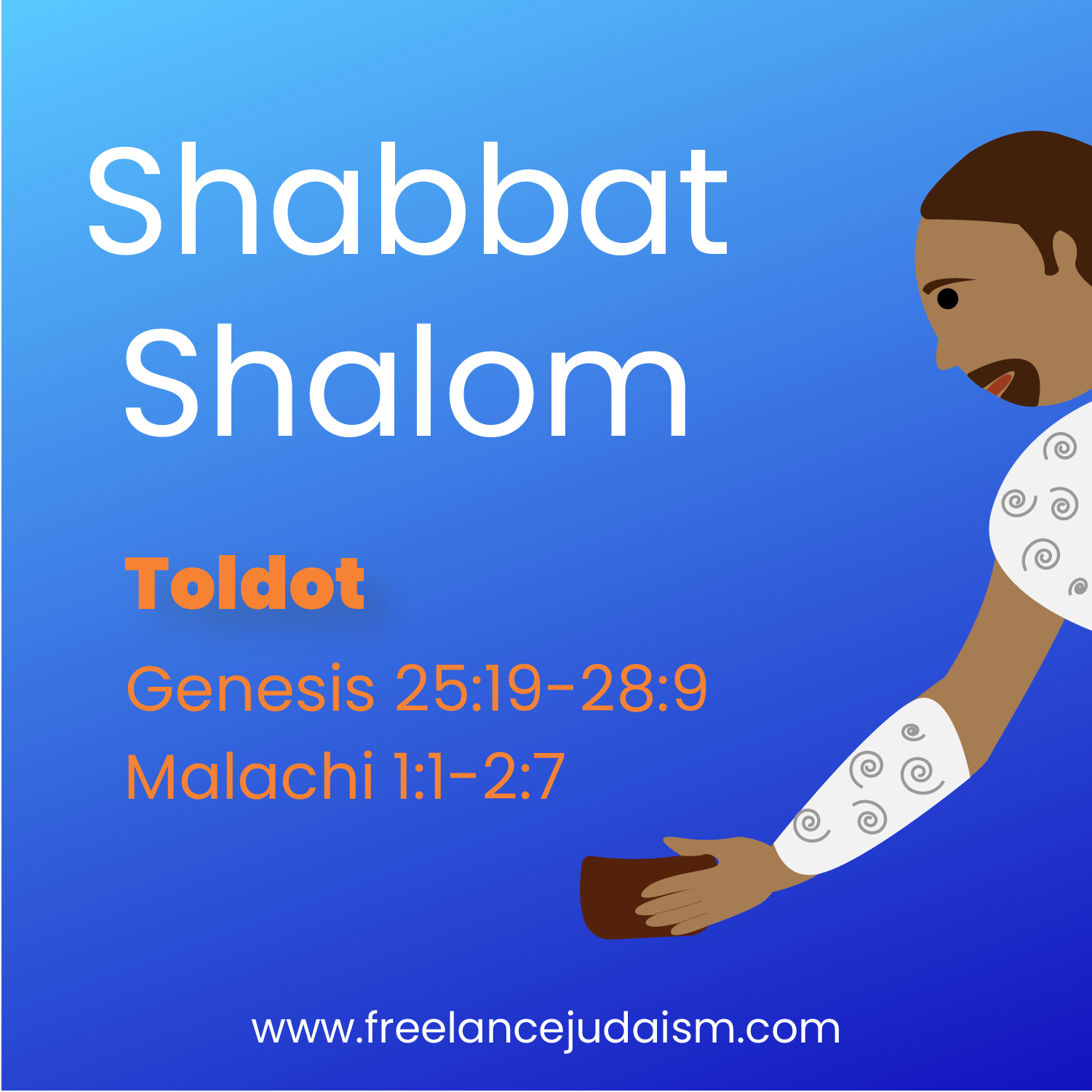 Triennial #3
Aliyah #1: 27:28-30
Earlier in this parshah, Eisav (Esau) had sold his inheritance to his brother Ya’akov (Jacob) for a bowl of stew. When we begin with this Aliyah, we are at the tail end of Ya’akov stealing his brother’s special family blessing by tricking their father Yitzḥak (Isaac) with the help of their mother Rivkah (Rebecca). In this Aliyah, Yitzḥak offers a special fatherly blessing, asking God to provide for Ya’akov and to let him be great in the eyes of all the nations of the world. He blessed that Ya’akov be greater than his siblings and that God curses those who curse Ya’akov and bless those who bless him.

Aliyah #2: 27:31-33
As soon as Ya’akov leaves, Eisav returns with a meal for his father. But when he greets his father, Yitzḥak is confused. He asks who is before him to which his son responds, “it’s me! Eisav!”. Yitzḥak announces his confusion and anger and informs Eisav that he has already given away his blessing to another.

Aliyah #3: 27:34-37
Sad a crying, Eisav asks his father for his own blessing. Yitzḥak explains that he has already given everything over to Ya’akov, including being a master of Eisav and the rest of their siblings.

Aliyah #4: 27:38-40
Nevertheless, Eisav pleads through his tears with his father for just one blessing from him. Being the gracious and loving father he is, Yitzḥak provides a new blessing just for Eisav. While his blessing maintains that he will serve his brother, he adds that one day Eisav shall break free from his brother and serve only himself.

Aliyah #5: 27:41-46
As sadness gives way to anger, Eisav becomes enraged with his brother Ya’akov. He declares that once his father dies he will set out to kill his brother. Fortunately for Ya’akov, his mother Rivkah learns of Eisav’s intent and sets out to do something about it immediately - after all, Ya’akov is her favorite. So she informs Ya’akov and insists that he flee to his uncle Lavan’s (Laban) house in the land of Ḥaran. Knowing that Yitzḥak would be heartbroken by this news, she comes up with yet another scheme to trick her husband. Rivkah tells Yitzḥak that she does not approved of the Ḥitite women in the land, and that she would like Ya’akov to marry someone within the family.

Aliyah #6: 28:1-4
Her scheme works! Yitzḥak calls for Ya’akov, blesses him and sends him off to the land of K’na’an (Canaan), to the house of Lavan to marry one of Lavan’s daughters. He offers Yitzḥak a blessing that he should have lots of children and take possession of the land of his father, Avraham, the land of K’na’an.

Aliyah #7: 28:5-9
Our aliyah and parshah ends with the departure of Ya’akov who heads off to fulfill his parents’ wishes. Upon hearing that Ya’akov would be marrying within the family, and not a woman from the nations in K’na’an, Eisav sets off to do the same. He goes to the house Yishma’eil, Yitzḥak’s brother, and marries one of Yishma’eil’s daughters, Maḥalat.